I promise not to use food for anything else but consumption. And repurpose our water usage for nature. Sounds like a funny promise? Well, think hard, teachers….. 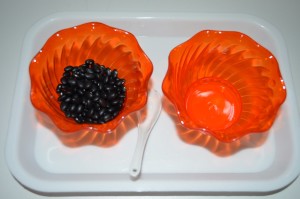 For eleven years I have been using beans for my pouring work. Quinoa for my spooning work. Cereal for necklaces. Flour & Salt in my special play dough. It has to stop in my class and in my home. This is food, and it’s being wasted. That’s a shame, and I promise to stop. Can you?

When I rethink anything about the classroom, and it requires a change I always tell my students, “Teachers are always thinking” to avoid lengthy over-their-heads-teacher-talk. This one, I will be sure to explain my answer. I will be sure to tell my little 3-6 year olds that not everyone has the food they need. So, I’ll have to think of something else. Here’s a small list (keep in mind, children who put things in their mouths should not be around these items):

My lovely co-teacher volunteers at a soup kitchen every weekend. I will take donations for food pantries. We lead by example.

Children are the most visible victims of undernutrition. Black et al (2013) estimate that undernutrition in the aggregate—including fetal growth restriction, stunting, wasting, and deficiencies of vitamin A and zinc along with suboptimum breastfeeding—is a cause of 3·1 million child deaths annually or 45% of all child deaths in 2011 (Black et al. 2013). Undernutrition magnifies the effect of every disease, including measles and malaria. The estimated proportions of deaths in which undernutrition is an underlying cause are roughly similar for diarrhea (61%), malaria (57%), pneumonia (52%), and measles (45%) (Black 2003, Bryce 2005). Malnutrition can also be caused by diseases, such as the diseases that cause diarrhea, by reducing the body’s ability to convert food into usable nutrients.
Stunting
Globally 161 million under-five year olds were estimated to be stunted in 2013.
The global trend in stunting prevalence and numbers affected is decreasing. Between 2000 and 2013 stunting prevalence declined from 33% to 25% and numbers declined from 199 million to 161 million.
In 2013, about half of all stunted children lived in Asia and over one third in Africa. (UNICEF et al. 2014b)
Wasting and severe wasting ·
Globally, 51 million under-five year olds were wasted and 17 million were severely wasted in 2013.
Globally, wasting prevalence in 2013 was estimated at almost 8% and nearly a third of that was for severe wasting, totaling 3%.
In 2013, approximately two thirds of all wasted children lived in Asia and almost one third in Africa, with similar proportions for severely wasted children. (UNICEF et al. 2014b)

Mother and Montessori Teacher
Jessie carries a Montessori Teacher Credential from American Montesssori Society, and a Master's of Education for Early Childhood Education. She blogs about family life, teaching preschool and kindergarten, and the role of the teacher. Jessie and her family live in New England, where Jessie works as a Primary Teacher for ages 3-6. Her own children (Montessori Alumni) are encouraged to follow their own interests, which currently include Irish Step Dancing, Art, Bird Watching, and Girl Scouts.